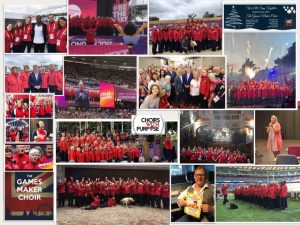 Read about another incredible year for the ‘Go To’ Choir for Sport!

2017 started with enjoyable, though intense work as usual with choir members rehearsing together and at home, honing skills on tunes both known and new to the choir. This was just as well with the range of new opportunities which were to come our way this year.

As the “Go to Choir for Sport”, with a growing bank of experience in singing at Athletics, Rugby, Hockey and other international sporting events, a lot of time is spent, liaising with event organisers and identifying those where we can entertain spectators, often at huge sporting arenas. We had our eye on one event in particular in the late summer of 2017 – can you guess which that might have been?

But first ….. there was a ‘first’ for the choir

Back in 2015, we had been honoured to sing several anthems at some of the international games during the Rugby World Cup (#RWC2015) At one such game our team managers met the managers of The Parachute Regiment who had meticulously performed the Field of Play Flag Ceremony. Conversations then went on to develop, this year, into our first public concert as a choir. On the 12th of July we had the total honour of performing with top military musicians at one of the Summer Series concerts at the imposing Royal Military School of Music, Kneller Hall, Twickenham. What an unforgettable experience that was! Read more here

The summer of 2017 saw London welcome Para Athletes from all over the world to the Queen Elizabeth Olympic Park again, 5 years after the Paralympic success of London2012 In July, just a few days after the Kneller Hall concert, members of the choir were privileged to perform on the Medal Ceremony stage in the World Para Athletics Championships ‘Hero Village’. Read more here

Later in July, members of the choir joined other top class singers and musicians at a special concert at the famous Union Chapel, London to celebrate unity and togetherness in the face of growing world tension. This was an opportunity to be part of an amazing project, in another world class venue, but there would be more to come.

Top of the bill, with the top of the world The pièce de résistance came on the 4th of August, 5 years to the day from when the choir was born during London 2012! We had the incredible honour of performing on the Field of Play to entertain the packed London (Olympic) Stadium during the Opening Ceremony of the IAAF World Athletics Championships. As volunteers, the warmth of welcome from the athletics fans was very special, bringing back memories of how the 70,000 volunteer Games Makers ‘made London 2012’ as Lord Sebastian Coe commented in his 2012 Closing Ceremony speech. And talking of Lord Coe ……Read more here

To paraphrase the choir’s signature song, Elbow’s “One Day Like This”, the decision was made this year to open the criteria to join this unique choir to more singers, to include those who have volunteered at a wider range of large sporting events. See the list here. So if you love to sing, and fancy the opportunity to join us in more experiences such as those described here, get in touch soon.

Why not join one of our rehearsals to see just how much fun it is to be part of the Games Maker Choir family?

Finally, for now…..the whole Games Maker Choir team join in wishing you all a very Merry Christmas and a peaceful , sporty and musical 2018!

If you’ve enjoyed part 1 of the 2017 Review, get yourself comfortable and take a look at Part 2!