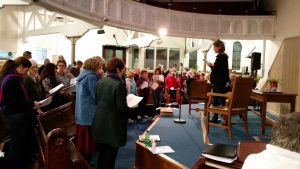 It’s Spring and The Games Maker Choir now has four rehearsals completed for 2017.

That may not sound a lot, but it’s evidence of one of our ‘USP’s. We like to think that we are pretty unique in that unlike many choirs who get to rehearse once a week, Games Maker Choir members only get together once a month, travelling from far and wide, for an intensive (but always enjoyable) full on rehearsal in ‘our’ church in Battersea. We do also have a fair amount of ‘homework’ and online learning aids though, so as to make the most of the time when we are all together.

It’s incredible the range of music that we have learnt since first getting together in 2012. The choir’s repertoire is continually growing and we now sing everything from Elbow to Elgar. We’re well known for being ‘multi-lingual’ too and able to master some pretty powerful national anthems, all in their native tongues. But we don’t just do anthems!

Another new language that we are getting to know very well is Latin, for Edward Elgar’s “Nimrod – Requiem Aeternam, from the Enigma Variations”.  A far cry from some of the huge anthemic tunes we have sung at several big sporting occasions since 2012, but a very inspirational and moving piece and (we modestly admit) a lovely sound.

We’re also mastering Karl Jenkins’ beautiful “Adiemus” theme from “Songs of Sanctuary”. If you ever get to hear us perform this piece and struggle to place the language, it won’t be down to bad diction, the words are completely invented by the composer!

And the new languages don’t stop there. Watch this space for more news coming soon.