Making our own kind of music, and some new friends too 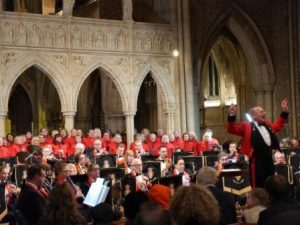 The Games Maker Choir have had some unforgettable musical and sporty experiences since the choir was formed during the London 2012 Olympics, all ranking as true ‘pinch me’ moments.

Last Saturday proved to be yet another such occasion set this time, not in an iconic sport stadium but in the impressive surroundings of the Church of St John the Evangelist in Upper Norwood, South London, joining forces for the first time in a concert with our new friends of The Central Band of The Royal British Legion. The concert, themed as “Songs from Stage and Screen” was a great opportunity to demonstrate the choir’s growing versatility, inspired and guided by our wonderful conductor and Musical Director Christopher Killerby, who ably conducted both band and choir together for the first time. The performance introduced some new songs for the choir, including Adele’s dramatic”Set Fire To The Rain” and aptly, with many new friends in the band “You’ve Got A Friend in Me” from the film “Toy Story”. These proved very popular with the audience, along with our classic set pieces, Snow Patrol’s “Run”; “When You Believe” from the film “The Prince of Egypt”and of course our signature piece, Elbow’s “One Day Like This”.

Another new song, debuted at this performance was “Make Your Own Kind of Music” (Cass Elliot/Paloma Faith) again,very appropriate as both band and choir came together to do just that! The band also performed some beautiful pieces from their impressive repertoire, directed by Captain David Cole MVO, Director of Music to the Royal British Legion and musical director of the BAFTA Award winning Festival of Remembrance, broadcast each year by the BBC from London’s Royal Albert Hall.

Their programme included a wide range of pieces, from the poignant “Hymn to the Fallen” from the hit film “Saving Private Ryan” and Eric Coates’ rousing “The Dambusters”, through to the traditional “Greensleeves” – and an homage to Richard Rogers, including favourites from “The Sound Of Music” and Oklahoma, ably accompanied by both choir and audience! The evening finished in true “Last Night of The Proms”style with a passionate rendition, with full audience participation, of Elgar’s Pomp and Circumstance March No 1 “Land of Hope and Glory”- with encore!

These and many more classics were beautifully performed by some very talented musicians, who all volunteer their time and talents to raise money for that great cause The Royal British Legion.Their musical expertise was received with obvious delight by both audience and choir, who were privileged to feel part of this incredible evening, the first of many such occasions we hope.